Leaving Ms Viking in Prague I took the high speed train back to Budapest which is now like returning home for me. I stayed in a brand new Airbnb Apartment right next to Zsuzsanna’s and unpacked and popped over for a small glass of wine at my favourite breakfast café the Gerloczy, and when I got home there is a knock on the door and it is Zsuzsanna. Fantastic.

I will show you pictures of the apartment because once I leave this part of Europe the accommodation will get more modest as the prices increase substantially! 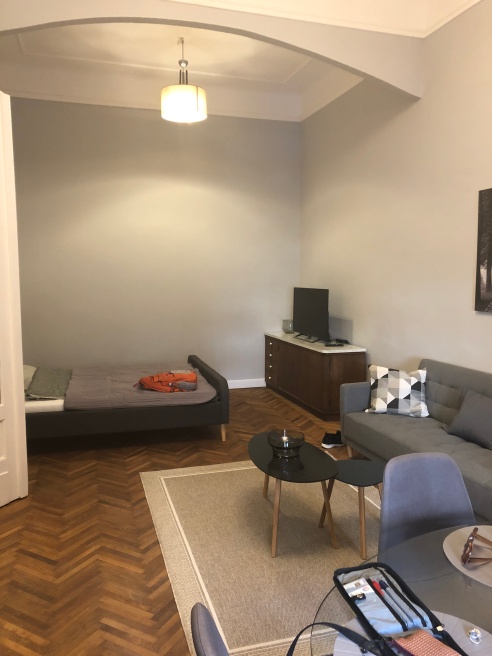 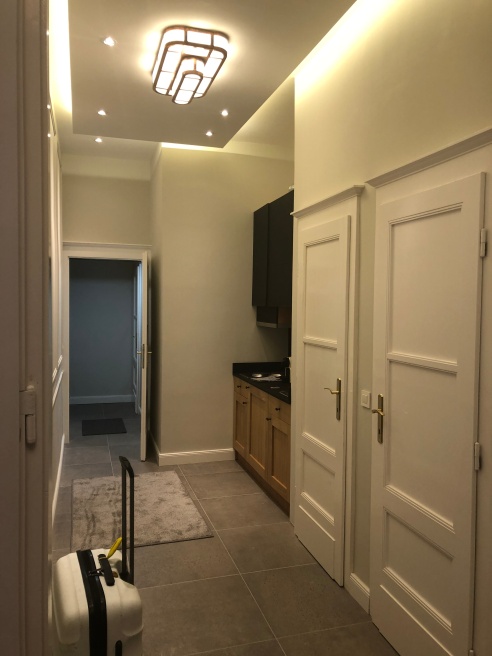 We have dinner in at her apartment so I can try all sorts of traditional Hungarian things. Sour cream, cheese, paprika paste, all types of salami/ham and bread – the biggest bread you have ever seen! And wine (of course) and talking of course. 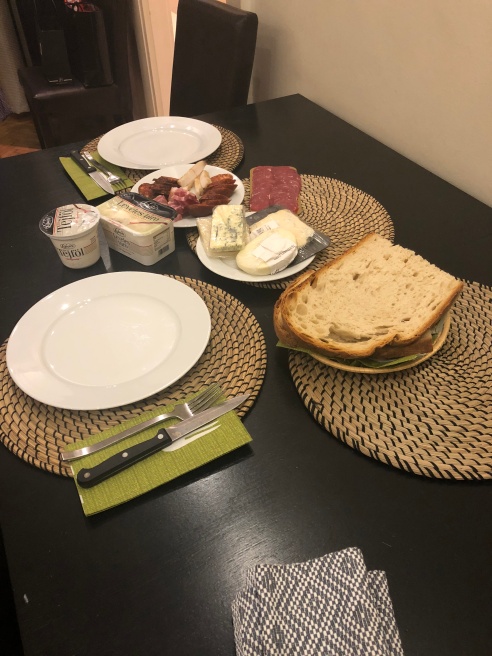 The next day is my birthday, Whilst I got to the hairdresser for maybe the cheapest colour and cut I’ve ever had (under NZ$40!) and looked good, then we went for lunch at the famous but very busy and filled with tourists New York Café, and we had Goulash soup (of Course) and fish but then couldn’t face any of their work-of-art desserts. We had a small scare on the way with Zsuzsanna catching a Romany woman with her had in her bag and holding her wallet! She didn’t get it and partly thanks to the fact that as I was wearing high heels I had put my jandals in a small bag into the top of her handbag for the walk later! 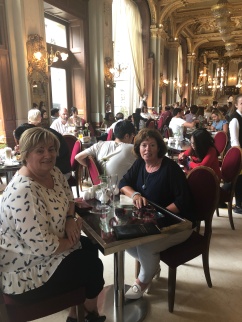 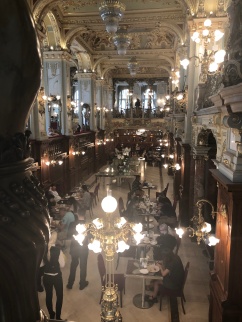 At night we went to a famous Hungarian modern dance performance, which I’m still thinking about later. They are called Experidance and they have a variety of programmes but the night we go they are performing Leonardo (about de Vinci not de Caprio)  When I told my Italian friend Cecilia – she said “our Leonardo?” Yes indeed. 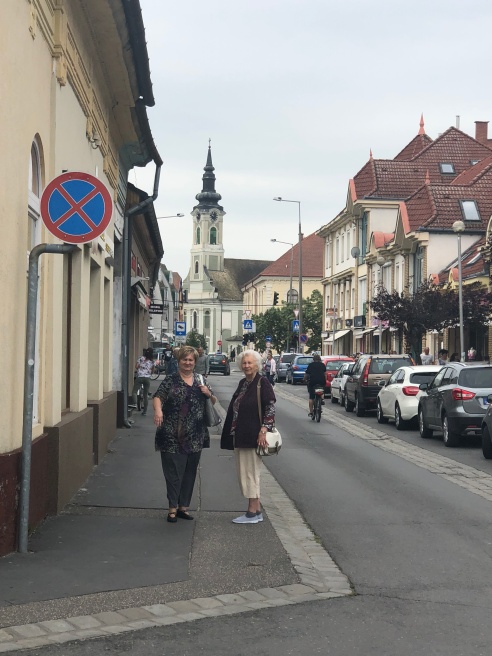 Zsuzsanna and Eta in Baja

The next day we went to Baja in southern Hungary which is Z’s home town and where her mother lives. The delightful, Eta picked us up for the bus and drive us to my hotel in her little red car like a Ferrari. Eta always offers food (and drink) and  we had to have a palinka toast for my birthday the previous day and coffee and cake and all sorts of delicious things. Unfortunately the language means that our communications is limited with Z having to translate everything. 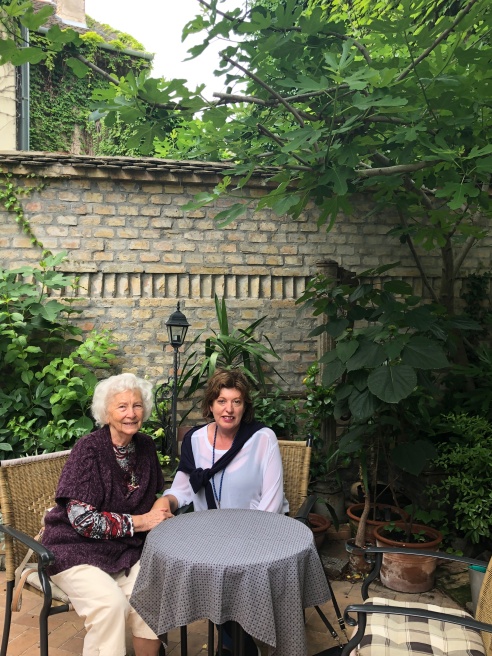 Waiting for Lunch – Goulash of course!

Z and I did a little retail therapy and had a pedicure and did some small town wandering before heading out on the town on Friday night in her new jeans (no shopping for Ms Pacifica as the luggage is a burden!) It’s a typical European Friday night, all guys are watching football, and women are talking at the outside bars. 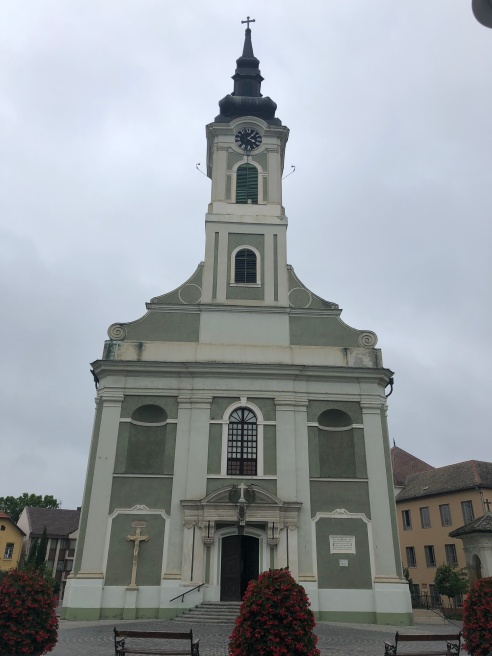 Back to the onion domes

We also had a brief reprieve from the weather, with temperatures dropping to the point of having to wear sleeves! But only for one day and then it warmed up again. It has been unseasonably hot since I arrived, high summer temperatures  (30+) in May/June are not usual.  We went on a day tour to a town full of wine cellars, (with Ms Pacifica driving Eta’s little red car).

We passed cute power poles with nests for stork families and there were a lot in residence. We tried some wine in a real cellar with a guy that doesn’t produce it commercially – He’s just an amateur weekender but the wine was pleasant enough and he was happy to share it. 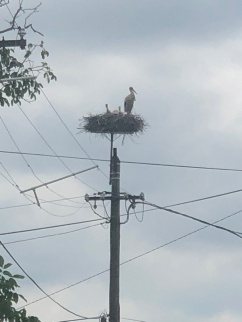 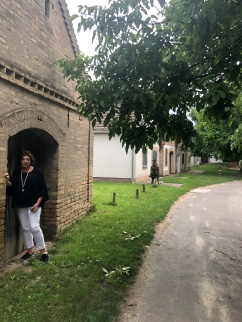 There was a wedding on at the hotel where I stayed and the modest car remained outside overnight. 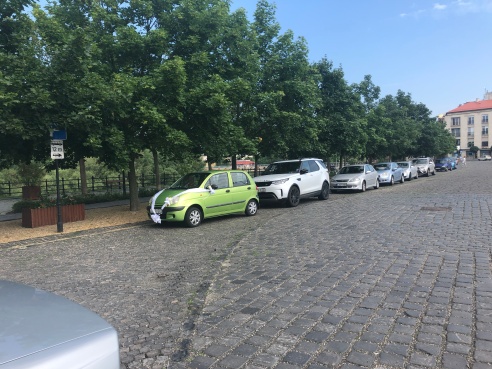 Baja Square in the early morning when it is peaceful and with less cars around. 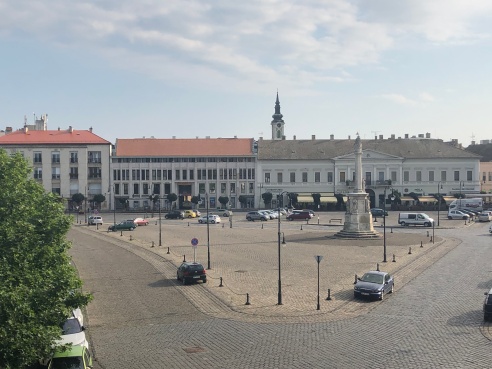 The town of Baja is on a river, a tributary of the Danube which is joins to just out of town creating islands, where we walked and came across a horse and carriage competition. Traditional skills are evident and the remnants of costume. Carts have to go around a course like event riding without hitting a cone. 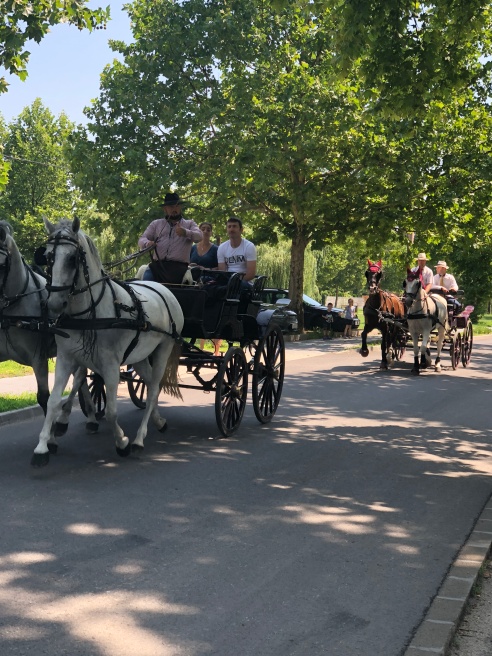 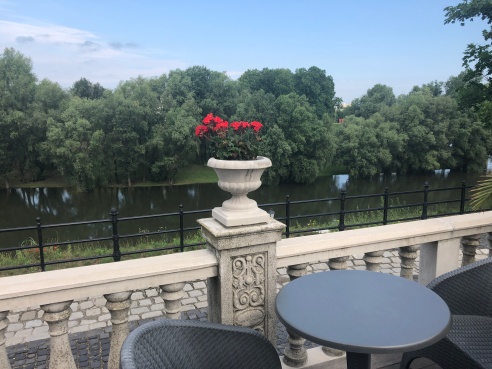 Hotel Duna Terrace beside the tributary of the Danube

On Sunday night I headed back to Budapest again for the night and flew out to Bologna the next day. Coming up — Italy.