Hard to believe… but we took another tour. They pick us up outside our house at around 9.45 am and we set off with a group of 8-10 Mexican and foreign tourists for a day out in a little minivan.

This time we went to an archaeological site – Mitla, and to the Hierve el Agua – which is a petrified/calcified waterfall, and to the largest/oldest/ biggest diameter tree in the world (or maybe just Mexico) and finally to see some weaving and natural dyes and to a mezcal factory. A full day’s agenda.

We started the the big tree – El Tule which is the type of tree. It is a Montezuma cypress and they claim it is 2000 years old – up there with Tane Mahuta. Whilst every country in the world may claim the biggest tree, it certainly has a huge rambling trunk and sits in a cute church courtyard surrounded by topiary plants. 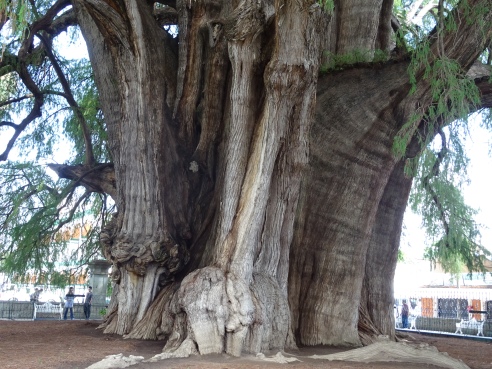 That sure is a rambling tree trunk!

It sits outside a simple little parish church 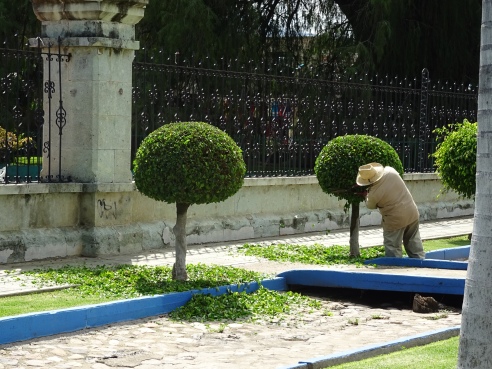 Well, they’re never going to inherit the title, if you keep trimming them back!

The name means boiling water and apparently when it comes out of the ground the minerals react with oxygen and is bubbles and looks like boiling water! 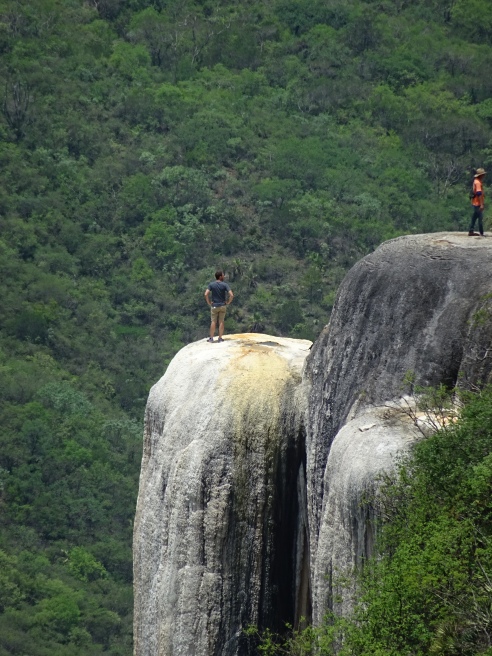 And No… we didn’t walk out to the edge

We did walk down to see it from below. Impressive.

We got our walk in just in time as the heavens open for huge rain storm as we went for lunch, and then to Mitla – another archeological site. There was so much rain the streets had turned into rivers and we had to turn back twice as fording looking too deep and swift!

Mitla was inhabited later than Monte Alban, and was still in use when the Spanish arrived. They weren’t impresses with the sacrifices or alternative god worship and destroyed a few temples and popped church on instead – San Pedro.

San Pedro Church… much better…replacing that pile of rocks they had before.

This pile of rocks

The mosaic of stonework is unlike anything else seen in Mexico and was though to have been done by the Mixtec people – later and more archaeologically advanced than the Zapotec people.

Then we were off to the weaving place – where they used natural dyes including the cochineal insect and black and white sheep fleece to product all of these colours. 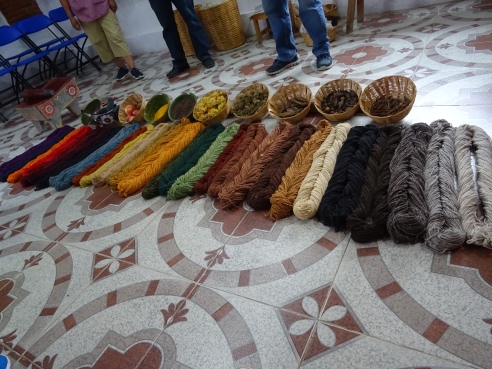 An agave ‘pineapple’ – which ends up as mezcal

A few more bottles in the making, waiting in the carpark.

We had a tasting of a few – young, older, old… plus some form other cactus’s. None was purchased – not my cup of tea! We both decided we’d rather have a nice glass of wine – and we needed one after our big day out.