Some of our readers are thinking that this trip is all about sunsets and margaritas and shopping and visiting fantastic art sites. But, not every day is so easy or safe.

So… being the types that always follow the rules… we carefully planned our trip to Taxco on the first class buses that went on the tollroad, in the daylight, and we set off.

After passing a horrendous accident on the motorway with six bodies lying on the road (some with a bit of sheet over them), we were going well until we reached one of our bus transfer points in Cuernavaca – just 100km from our destination. The back-up bus driver suddenly announced that the centre of Cuernavaca was closed off for a “manifestation” (demonstration) and they were therefore dropping us off on the side of the road outside of town! Bags are off-loaded and Lola and MsPacifica are left standing at a major roundabout with all of our worldly possessions around us. Que disastre! May I also point out that it was mid-afternoon and about 32degrees!

Anyway after a taxi ride and  a couple of chats in español, we negotiate a taxi to take us to Taxco – on the toll road. So now you may think that our worries are over, but no, this particular driver thinks he is in Buenos Aires or Dehli, creating lanes and indulging in peligroso overtaking manoeuvres all the way. This was after stopping for fuel (which we had to pay for) as he didn’t have any money!

The machismo taxista decides on the backstreets of Taxco town that it is too small and steep for him and so offloads us. It IS a very steep town…. and a young man carries Lola’s bag to the hotel on his shoulder like a pack horse…. and we stumble on behind. Finally we arrive at our apartment. Our fans sounds like a jet engine… but we need it and the furniture here – well let’s just say it rivals the dining room table in our last residence. What were they thinking?

After  quick rest we head out… it is very narrow on our street and has cars going both ways so sometimes you have to duck into a store to avoid being run over. Can you believe that the store RIGHT NEXT DOOR to the apartment has pearls, beads and trinkets – thousands of them…. for you to make you own necklace…. if you like a jewellery project – and we know someone who does!

In Taxco the taxis are old VW’s but even then pedestrians and vehicles are a tight fit!

A few strings of beads for the DIY jewellery projects

Every store in this town is a silver jewellery store and so we slowly make our way to the zocalo and up to a rooftop bar for a our sunset cocktail and view over the  sights. After enduring the hardships of the day, Lola is now in jewellery heaven!

It is pretty – but there are also military police here in camo gear with serious machine guns. A frisson of danger to go with our margaritas tonight! Salute! 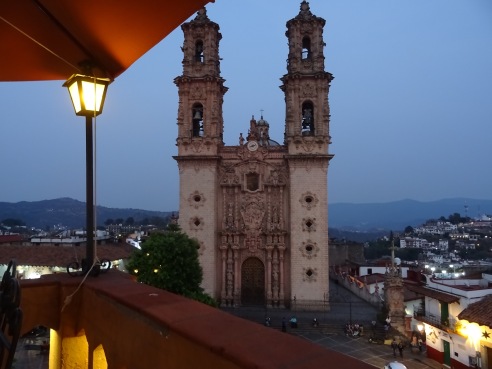 4 Responses to “The Badlands”